There are a number of nail problems, such as:

Thick and hard to cut nails: 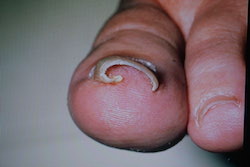 Our podiatrists at the Kew Foot Clinic are experienced and trained in the correct cutting technique. We also have the right clippers and equipment to make this job easy and pain free.

Fungal nail infections occur when fungus infects the skin under and around the nail bed. This causes the nail to become thickened, discoloured, brittle and flaky.

It is important to prevent the fungus from spreading to other nails. There are a variety of treatments available but unfortunately their success rate is variable.

Symptoms of an ingrown toe nail include pain along the margins of the nail. Infection and inflammation of the edges of the toe nail are commonly seen. The big toe nail is the most common nail affected. There is also a condition called Involuted toe nails. This is where the nails curl around and the nail edges digging into the skin at the side of the nail.

There are a number or reasons why ingrown toenails occur. These include:

Nails should be cut along the contour of the toe or straight across. You should not cut down the sides of the nail and nails should not be ripped or picked at.

Tight or short shoes restrict room for nail growth with resultant pressure on the nails which can lead to ingrown nails.

Sometimes the nail edge curves into the skin either due to trauma or an inherited disorder.

People with chubby toes will find the skin at the side of the toe is more likely to be traumatized or pierced by the nail as it grows straight out.

Medications such as Roaccutane can cause ingrown toe nails.

How are they treated?

The problem may be treated by educating about a correct cutting procedure. On occasions, a nail spike needs to be cut out by the podiatrist in order to take away the pressure from the nail/skin edge to allow healing to occur. The body recognizes the sharp nail edge as a foreign object and doesn’t allow the infection to heal, even despite having taken antibiotics.

Surgical correction of an ingrown toenail is performed under local anaesthetic and is usually very successful. This procedure is performed at our clinic. In most cases only a small portion of the nail is removed and cauterized.

If you are suffering any of these nail problems, call Kew Foot Clinic on 03 9853 6877 to make an appointment for the appropriate treatment.

The clinic remains open during COVID-19.

How to prevent foot
lower limb & back pain,
and longterm deformity...

A cam walker is a boot or a brace that is specifically...Read more...

Do you think you might have toe nail fungus?  We now have the latest test kit for instant … END_OF_DOCUMENT_TOKEN_TO_BE_REPLACED